If you’ve read the tech news lately, you’ll know that Apple is going to release it’s Apple Watch on April 24th in Australia, Canada, China, France, Germany, Hong Kong, Japan, the UK and the US. The most surprising and talked about subject about the release was the price on it’s Edition series of watches, which will range in price from $10,000 to $17,000. These watches are made of 18-karat gold which Apple claims to be developed to be “twice as hard as standard gold” and sport the sapphire screen. While these watches look “nice” they are certainly still pieces of technology. The funny thing about technology is that it depreciates much faster than other durable goods – faster than a mahogany piece of furniture, for example. I’d expect digital technology products to depreciate faster than mechanical products of a similar type (for example a Rolex watch).

If one spends $17,000 on a Apple Watch – a watch that starts out at around $350, then one should expect the rest of the watch to be worth at least $16,000 – which it is not. You’d be able to buy more than 12 ounces of gold for this price. The gold portion of the watch is not described to be compatible with newer versions of the hardware, so when the Apple Watch 2 comes out the value of your watch probably goes down by around $10,000!

As someone concerned with you making the most of your money, while still enjoying life, I would not suggest buying a Apple Watch Edition. Go ahead and splurge a few hundred dollars on a piece of technology if if will, but $17,000 is a fools purchase.

A bull spread is a type of call option that aims to profit off of a underlying security that has a specified percent increase. Most of the time investors aim for moderate or low price increase.

I personally am not a fan of the bull spread because of the fact that you’re limiting your winnings, it’s like buying insurance on your winnings. I must prefer having unlimited UPSIDE potential with a put option in place as INSURANCE. Even so, when you’re hedging your investments you are limiting your profit potential.

You can also do what I call a “bear spread” by buying a put option and then selling a put option for a even lower strike price. This would be in anticipation for a moderate downfall in the price of an underlying security. I would personally never do this, it would almost take a wizard or oracle to predict such a price fall to such a degree. You’re better off shorting a stock then paying such hefty premiums for these options.

If you’re interested in seeing what a bull spread looks like on a profit-loss graph here it is below: 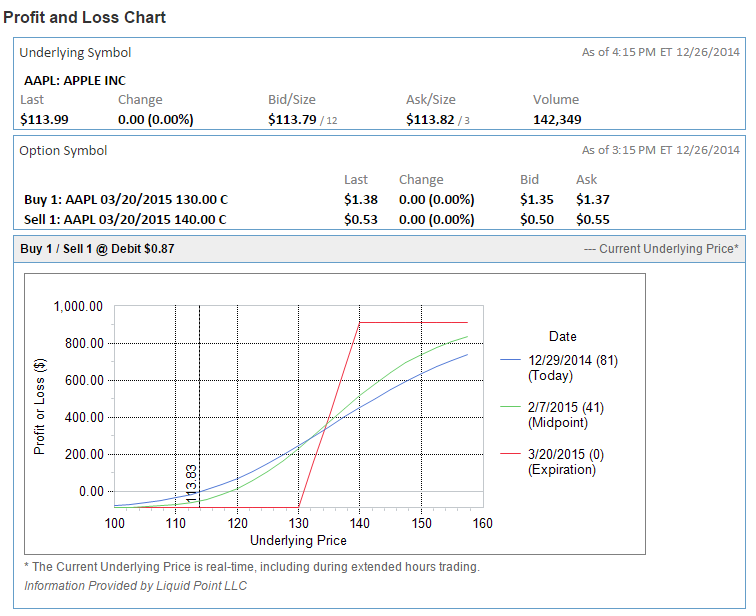