Well, it’s been about a year since my last post. A lot of things have changed for me, a new job with unique challenges and opportunities, an expanding family, and lastly a move from one state to another. That being said, I do feel like I’ve abandoned my subscribers and for that I’m sorry!

Now that that’s out of the way I’d like to recap for you what I think has happened so far this year and what you can do to situate yourself financially to make the best return on your investments.

It’s become clear that the media and the political elite have really been shocked at the rate of inflation over the past couple years – the official numbers are drastically underreported yet are still shockingly high. 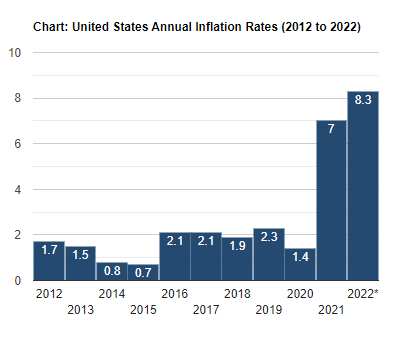 Now I have my own metrics of calculating inflation, that being the price of a Michelina’s frozen Entrée. You’ll find this in the freezer section of any major supermarket. Now I know the prices for these things had been $1 each for the longest time. Last year the price went to $1.30 and this year they cost $1.69 at the same place (Walmart). Other stores charge even more… So if you are gauging inflation based on food cost if you’re diet consisted only of these then the inflation rate is closer to 30%. 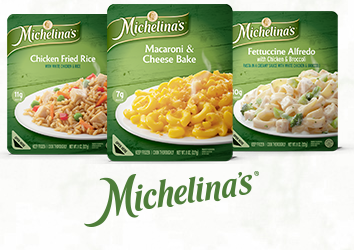 Now on a more serious note, of the around 72 million Baby Boomers in the US, the older spectrum are now in their early 70’s. The mandatory 401k Withdrawal age in 2022 is 72 (it used to be 70.5). That means we will start to see outflows from the largest population group in the US, and potentially more voluntary withdrawals as it doesn’t make sense to for Baby Boomers to hoard cash if they are in end of life stage. This means either the Federal Reserve is going to allow the stocks to be tanked by their higher interest rates and destroy the quality of life for millions of the older generation and make them reliant on government benefits OR go back to purchasing stocks and putting the brakes on interest rate hikes.

The quiet quitting movement is here, and it’s loud. This is not just happening in the US but also throughout the world in developed or developing countries – in China this is called the “lie flat” movement.  As someone who has been to Europe, this is already the norm in countries like Italy and France – but as it becomes normalized in the US and China the entire world could become less productive. Less productivity could result in higher prices for goods and services. As long as you’re in a position where you’re income can scale with inflation you should be ok, but for those that can’t it will be important to have job mobility. For retirees this is just a bad situation altogether.

Now to the meat of the article – what am I doing to situate myself where I’m not blown away by the coming events. First thing, I’m holding the stocks in good long term companies. My portfolio is heavier in defense, food production, and Apple stock. I see Apple as an industry in itself since it has put itself in a good position against companies who leeched off of people’s private data (I won’t name names and get demonetized). Secondly, Apple is second against none ever since it surpassed Intel in making the best phone processors. Lastly, Apple has tons of cash reserves in USD so a strong dollar isn’t as bad as you may think for this company. Food stocks have done pretty well since the war in Ukraine, same with defense stocks. Both of these are also things that people and governments will not stop spending money on. In fact, a larger proportion of money is spent on these sectors during times of world tension like we see today.

You will not see me going near buying discretionary spending companies like Build a Bear with a 10 foot pole. In fact I have purchased put options on this and other frivolous retail companies. In times of depression you’ll still see a lot of people in supermarkets but very few people in Coach stores. Middle class luxury items are getting and will continue to get quashed for the next year at least in my opinion.

I’m also holding stock in Chevron, as energy prices stay high. The biggest risk to oil stocks are political actions against them by the current administration. They can pick winners and losers, and its a risk you have to evaluate as you hold companies that can be construed as controversial. If you went back 40 years ago you would probably not have believed if the government and regulations could kill the tobacco industry, but it happened. This time the focus is on fossil fuels – the recent conflicts and the necessity for energy has probably drawn attention away from these companies temporarily.

Cash is important to hold in your portfolios, and people often call this “powder” for a reason, it gives you ammunition to get in when prices are routed in stocks and real estate. If real estate gets down to a level where I can reach my 1% to 2% rule on real estate returns I will probably buy another rental property. I will attempt to lock in a 30 year fixed rate but this all depends on what the mortgage and escrow costs are in comparison to my expected rental income.

Will I Keep Writing?

I’m hoping to write at least once a month from here on out. The major changes in my life didn’t need to put a stop to my posts, I just need to be more consistent. I’m still pretty active on my Facebook groups and pages.

The inflation we are experiencing in the United States is more than just money printing. It is because of herd mentality here in the States compounded by a growing lack of trust in the US Dollar abroad.

When I lived in Malaysia, each weekend there was a line that stretched for at least a few dozen people at a mall named Mid Valley in heart of Kuala Lumpur. That line was people exchanging their local currency – the Malaysian ringgit, into US Dollars. They did so to preserve purchasing power since their local currency was being devalued due to their country’s dependence on oil production for their economy. You see, when the US dollar is the world reserve currency it tends to preserve its power since everyone wants to collect them and not necessarily spend them. Imagine if everyone in the world was doing the same, and not just the mom and pop citizens but also entire governments!

This action takes circulating USD out of circulation at least temporarily, and demand of this nature makes the USD stronger versus the currency that are being exchanged out of. Even though both the US and Malaysia were making fiat (and I’m not talking about the poorly made cars) paper currency, the US benefits from strong demand from other countries continuing to prop up the dollar and wanting to sell their goods for dollars.

Now if you tune into CNN or some other popular news channel you will be told that price hikes have to do exclusively with ports being backed up due to Covid related worker shortages – this is not the whole story. Demand for goods is higher, and the desire to hoard goods hasn’t completely gone away from more than a year ago (remember when everything was rationed?). If you go to the local Costco or Sams Club here in Albuquerque they are still limiting the number of bottle water packs you can buy to two or three, people seem to still be being more toilet paper than normal, and there are folks who are already finishing up their Christmas shopping for fear of items not being available or being much more expensive come December. This spending is what I like to call velocity of money in motion, and is causing prices to go up on main street.

What about Real Estate?

The cash that the Federal Reserve created months and years ago had already funneled into the financial system first and caused companies flush with cash to go for asset buying sprees, such as real estate. Big companies like OpenDoor and Zillow bought homes over their value, in anticipation of “flipping” them and making money purely from the upward price trend that was happening since mid 2020. The only problem is individuals stopped receiving stimulus checks and companies started opening up and wanting people to get back to work – slowing down the home buying and turning the rising price trend around if even slightly.

I wholeheartedly expect home prices to fall in the hottest areas this winter, but I do think the fall will be short-lived as moderate inflation catches up. People will start to demand higher wages and the most profitable industries will be able to provide them. Industries that cannot adjust their prices very much to keep track with inflation will suffer, and their employees will suffer with stagnant wages. I expect the agriculture industry to come out of this better than before, same with companies that sell inelastic goods such as food and modest housing. Luxury housing will suffer along with luxury good industries.

What can I do?

Go back to my blog and read the article titled “How To Preserve Your Assets During 1970’s Style Inflation?”

Make sure your income keeps up with inflation, pivot to make that happen. Make sure you have skills that are in demand that are well compensated for if you’re starting out, and if you already have assets make sure they are cash flowing. Having debt during high inflation is a great thing as long as your income keeps up with inflation. For example, if you own a rental property and pay a 30 year fixed rate mortgage ideally you’ll be able to adjust your rent for inflation.

Inflation is not transitory in that it will return to what it was before Jerome Powell’s speech. It may slow down and prices for certain things may decrease as supply rises to meet demand, but you shouldn’t be dormant with your cash but put it to work ASAP. Watch for a real estate correction this winter for a buying opportunity if you’ve been waiting. Don’t panic. 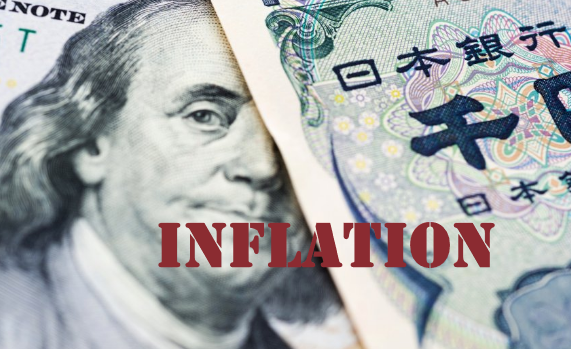 So times have changed, but inflation is back. In the 1970’s prices went up 10% year over year due to a few things – in my opinion OPEC and the departure from the gold standard were the biggest reasons. During that time period you would have made out quite well if you kept all your cash in energy stocks and real estate investments. You’d also make out like a bandit holding gold and silver.

During this period I think the same is true, however there’s a few differences.

What not to do: