The average stock investor should avoid most news stories related to stocks. The reason I say this is that many times people have emotional ties to gains and losses and tend to make far too many transactions for what is necessary based on reading a barrage of market news, which is a entire industry unto itself. I recently commented on how inconceivable it was for the price of oil to hit $10 per barrel, but that kind of news made headlines. While people were heading for the hills, I decided to and taught readers how to invest in oil using ultra ETFs. Now Brent crude is trading at $63.31 and those who had shorted oil when it was less than $50 per barrel would be feeling the pain.

Now the key word here is ‘most’. Many folks try to make a name for themselves and their product by claiming outrageous things trying to build publicity for their name and if the off-chance they’re right it was all worth it! Well, if they’re wrong then they’ll just stay quiet for a few months. There are, on the other hand, reasonable financial advisers who will make thoughtful suggestions about the state of affairs.

My suggestion is this:

The stock market is overpriced, a historically good bet but given current P/E ratios it’s just a matter of time before the market falls. The timing on that fall is between now and 1 year from now. The correction should be between 10 to 20%. Many people should be looking forward to this correction in order to bolster their portfolios at a discount.

Oil has taken a hit but is on a comeback. We will probably see the price of oil rise in a few months – possibly due to global conflict.

To act on this would be to simply sell stocks and buy oil.

Make sure to read my disclaimer below.

Recently I read an opinion article posted on Bloomberg View where a guy named Gary Shilling predicted that the oil price could fall as low as $10. The title of the article read “Get Ready for $10 Oil”.

Of course this is a sensationalist title, and the author probably doesn’t really believe that oil will fall that low, but it ranked #1 on Google News results. The link is here.

Before people go buy new Hummers, let it be known that the lowest production cost in the world is $10-$20 per barrel in Saudi Arabia – and Saudi Arabia only produces around 13% of the world’s crude. The US imports most of it’s oil from Canada, and produces shale oil at a cost between $25 and $95 per barrel. It would be more economical to simply stop pumping oil rather than producing it for free – and that’s what’s happening. Around 100 shale oil rigs were closed in the US in late January, and more are probably being closed as we speak. Countries with small bankrolls will not be able to afford running their oil industry with oil at $10, and will most likely end up in economic chaos. Russian oil production costs are between $10 to $16 but the transportation costs are high to get the oil to suitable refineries and around the world. World demand for oil is not decreasing, but increasing at a slower pace (until the effects of people all bathing in oil and taking joyrides in 18 wheelers starts to kick in).

As of today Crude WTI oil trades at $52.78 and Brent trades at $57.39. Brent is the price used for global oil producers and WTI stands for Western Texas Intermediate. This is up from the low of around $45 in late January.

With all the volatility in oil prices you can bet people are making money off of the price changes. You can too – just read my article “How To Capitalize on Low Oil Prices“.

With crude oil trading the lowest it’s been since 2009 there are a few things you can do today to capitalize:

As Jerry Reed says in his song “Lord, Mr. Ford“:

Well, if you’re one of the millions who own one of them
Gas drinking, piston clinking, air polluting, smoke belching
Four wheeled buggies from Detroit City, then pay attention:

Now is a perfect time to load up the family and take a road trip. A penny saved on gas is worth more than a penny earned (considering taxes).

If the price of oil remains low, many sectors stand to benefit from the cost savings to their business. Obvious candidates include shipping, airlines, and retail. Oil revenue dependent companies should be avoided if low prices persist, such as drilling support and manufacturing companies.

If you think the oil price is bound to jump up sometime in the near future then you can buy oil futures, or if you have a regular stock brokerage account you can trade in exchange traded funds (known as ETFs) which base their performance on the performance of the oil price.

As you can see, UCO has been hammered by the fall in oil price over the past six months while SCO has climbed over 250%. If oil stages a large rally then UCO has a lot of upside potential – while SCO has a lot to lose. Four potential strategies that would benefit from a oil price increase include the following:

Outside of purely playing the oil price movements with these ETFs, you can also consider buying companies that have been hammered by the lower prices. This strategy involves more risk because companies have the possibility of going bankrupt and bringing their share price to zero, while the oil price will never reach zero until a revolutionary technology make it obsolete (and that transition time would be formidable).

Oil behemoths are more likely to survive a sustained weak oil price than smaller more leveraged companies. Some of these giants include:

Smaller players that may return a better yield if a oil rally occurs include:

Whether or not the oil price remains cheap, recovers, or falls even further there are always ways to profit from it if you take a certain degree of risk. Given the deflated state of oil, it’s large but limited supply, and the motives behind the price bullying of American oil operators by OPEC I think oil will stage a moderate comeback in the next few months (make sure to read my disclaimer below).

Politics ALWAYS influence the stock market. Higher taxes usually means lower returns for companies and a falling stock market. Low interest rates means cheaper capital for companies as well as lower return alternatives for investors which drives stocks up. Why put money in a 0.1% interest account when you can be investing in a stock that pays 3% in dividends every quarter? Below is an example if you’re doubtful: 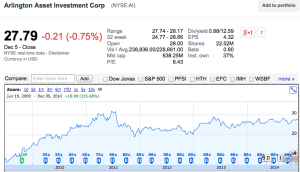 Higher regulations on the coal industry during the Obama administration have virtually killed coal stocks such as ABX which fell from over $73 in 2008 to its current price of $1.93. I’m not here to state a value judgement, but a pure stock price judgement – so make sure you pay close attention to campaign promises of politicians. Here’s a video of Obama basically promising to bankrupt coal companies. Whether you like it or not, industries change and the President or other politicians can help spur this change. 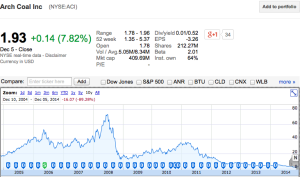 Keep a close eye on what the media and politicians say about regulation on the soft drink or tobacco industry, as well as the budget set aside for defense and even our space agency NASA. Oil prices are largely affected by conflicts in the Middle East, and trade protectionism also is something to watch out for.

How can you protect your financial assets in times of war? This depends first of all on which country you’re in and how is involved in the war.

If your country is the one being invaded then the best way to protect your assets would first of all be keeping it all in international bank accounts so that they cannot be physically taken from you and stashing up food and another vital supplies.

On the other side if you are in a aggressor country be prepared to put your money into inflation secure investments as most likely your country is funding your war with debt, something that ultimately results in increased inflation.

War commodities include petroleum/oil-based products, metals, and rubber to name a few – keep this in mind if you’re a commodities trader. The equity angle to this would be to invest in producers of the above products. There are also ways to invest in commodity futures through exchange traded funds (ETFs) that can closely follow the price of a future or even double the price change each day. Such funds that double the price are called ‘Ultra ETFs’, they are leveraged and carry a higher risk/reward – it is not recommended to hold these for extended periods of time based on their average upkeep. A recommended Ultra that may prove profitable during wartime or even a military buildup (due to speculation) is UCO.

Some straightforward investments that often beat the market during wartime include DoD contractors, both service and hardware providers. Notable stocks that fall into this category include Lockheed Martin (LMT), General Dynamics (GD), Boeing (BA), and Raytheon (RTN). The more conservative investors may consider buying gold, which will protect them from price inflation but is still subject to demand.

Most importantly, invest in your own health and well being during times of war.