Mass energy equivalence paved the way for our most powerful weapon and energy source. Nuclear force was not, however, the most powerful force in the universe according to this man. Instead, it was compound interest.

Einstein was a man of relativity, and while it is true that nuclear is the strongest type of force taught in the classroom, in the real world his statement makes a lot of sense. The top 1% of income earners will make much of their income off of investments, and these investments typically yield a certain percent of profit per year which is then applied back upon itself the next year. This is one way in which income inequality grows – because the lower wage earners do not put their money in compounding investments.

It is important for anyone looking to get the highest return on their investment to understand the basics of compound interest.

For those that don’t want to pull out a calculator to find out how long their investments will double in size there is a helpful and speedy way of figuring out roughly how long it will take to double their money. Divide 72 by the interest rate and that will be the number of years a annually compounding investment will take to double. See examples below:

If you use outrageously small or large interest rates the rule of 72 starts to break. Obviously a 100% interest rate will double your money in just 1 year, not eight and a half months!

The mathematical formula for annually compounded interest is

Where FV is future value, PV is present value, i is the interest rate, and t is the number of years. As most readers know, this is an exponential function of time (See Figure Below). 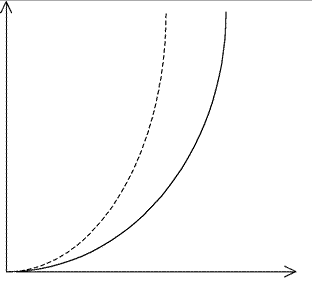 As you can see, exponential values can quickly get out of hand. Other real world examples of exponential growth include population growth in developing countries, inflations affect on currency (exponential decrease in value as seen below). 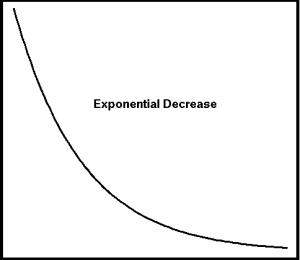 How inflation eats away

The phenomenon known as the rising income gap comes largely from these two graphs. The top graph represents invested wealth and the bottom represents buying power of a single unit of a depreciating currency.

If you’ve read to this point then you’ve already taken a good first step – you’re searching for knowledge and exponentially growing your financial acuity rather then let your mind exponentially waste away. I suggest creating a financial plan which takes into account your age (time till retirement), risk tolerance, and net worth and allocate uninvested funds into investment accounts. Investments can range from stocks, bonds, real estate, and even high interest savings accounts. Keep in mind that these days interest rates are amongst the lowest in mankind’s history, in the United States in particular. Most of all, don’t panic!

Posted in stock market and tagged Einstein, interest, the highest return on investment.